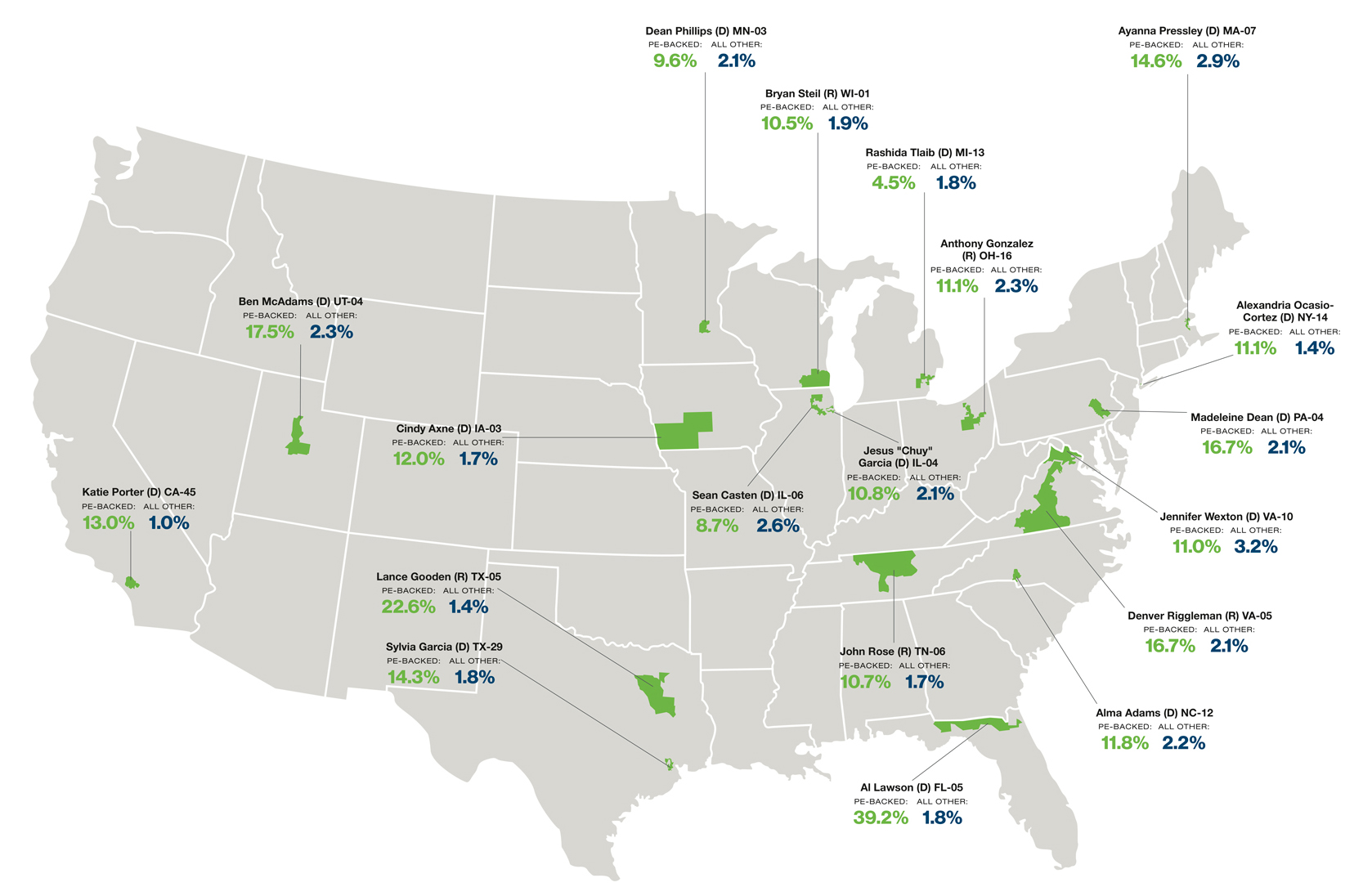 See a larger version of this map and other graphics in the MMG archives here.

Private equity-backed companies outperform the broader business community in much of the U.S., including in districts represented by new members of the House Financial Services Committee, recent analysis shows. The findings upend years of political messaging and create opportunities to educate lawmakers about the positive impact of private capital.

Twenty-one new members joined the committee in January. In 19 of their districts—excluding Hawaii and Guam, for which data was unavailable—PE-backed businesses had higher sustained job growth than other companies, based on data from Growth Economy, a database that tracks job and sales growth of U.S. businesses. According to the data, PE-backed businesses experienced “sustained” job growth— defined by Growth Economy analysts as new job creation during two or more years in a five-year period—at a rate 16 times higher than the broader business community in those 19 districts.

Recent analysis shows that of the more than 30,000 PE-backed companies in districts represented by new Financial Services Committee members, around 4,800, or nearly 16%, experienced sustained job growth between 2012 and 2017, the most recent period covered by the data. In comparison, of the more than 20 million companies without PE financing in those districts, only 200,000— or about 1%—experienced sustained job growth.

“Private equity-backed companies are one of the largest sustainers of job growth in the U.S. economy. Nobody else beats it,” says Gregg Cole, director of research and data innovation at the Business Dynamics Research Consortium at the University of Wisconsin-Extension, which partnered with PitchBook and ACG to develop the Growth Economy database.

Unlike venture capital, which is concentrated in tech startups on the coasts and select metropolitan areas, PE-backed businesses are headquartered across the country. Of the five best-performing districts represented by a new member of the Financial Services Committee, three were in the South, one was in the West and another was in the Northeast.

The top performer was Florida’s 5th Congressional District, which is represented by Democrat Al Lawson and includes portions of Tallahassee and Jacksonville. Of the district’s 51 PE-backed companies, 20 experienced job growth in two or more years between 2012 and 2017—a sustained growth rate of nearly 40%. Meanwhile, other businesses experienced sustained growth at a rate of 1.8%.

Growth Economy data shows that between 2012 and 2017, businesses with private equity funding added more than 5,000 jobs in the district. Revenue from PE-backed businesses also grew rapidly during that period. Collective sales rose from less than $765 million in 2012 to nearly $2.3 billion in 2017.

SUSTAINED JOB GROWTH ACROSS ALL 19* DISTRICTS

*Excluding Guam and Hawaii, for which data was unavailable

Even in districts whose PE-backed companies had relatively low sustained growth compared with other districts, private equity still had a positive impact on job creation relative to other businesses.

In Michigan’s 13th District, which is led by Democrat Rashida Tlaib and includes a large part of Detroit and surrounding areas, 4.5% of private equity-backed companies experienced sustained growth during the 2012- 2017 period. However, the sustained job growth at other businesses in the district was 1.8%.

Among PE-backed companies across the country, the most pronounced job growth occurred within middle-market companies, defined as those with annual sales between $10 million and $1 billion. Middle-market businesses created more than 21,000 jobs across the 19 districts, according to Growth Economy.

PE-backed middle-market companies in Florida’s 5th Congressional District showed the strongest growth of the districts by adding 5,300 jobs between 2012 and 2017. During the period, job numbers declined for small businesses and stagnated at large enterprises, making middle- market companies the sole driver of job growth in the district.

The Tip of the Iceberg

Data from Growth Economy challenges the perception that private equity investors purchase companies to strip their assets, fire employees and flip the business, an image perpetuated by recent political campaigns.

Private equity became a high-profile target during the 2012 presidential election, when candidate Mitt Romney was criticized by political opponents for his career at Bain Capital, the private equity firm he co-founded.

In his successful presidential race, Donald Trump distanced himself from private equity by promising to eliminate the preferential tax treatment given to carried interest, which compensates private equity and other investors. A number of congressional candidates in the 2018 midterm elections similarly took a stand against the financial industry, despite the positive contributions of private equity in their districts.

“Despite what you’re hearing, private equity is growing jobs—a lot of jobs—compared to the rest of the economy,” Cole says. “And not only that, but it’s sustaining them as well, which is not what Congress is used to seeing.”

“PRIVATE EQUITY-BACKED COMPANIES ARE ONE OF THE LARGEST SUSTAINERS OF JOB GROWTH IN THE U.S. ECONOMY. NOBODY ELSE BEATS IT.”

Despite the campaign rhetoric, a new class of legislators on the Financial Services Committee creates an opportunity for organizations like ACG to provide lawmakers and their staff with accurate information about the impact of private equity investment as they shape financial policy.

That makes it critically important to educate lawmakers about private equity-backed companies’ performance relative to other businesses, a narrative that runs counter to most political messaging.

“It seems like the further we look at private equity job growth, the more growth there is. There’s a larger story about these companies that’s not being told,” Cole says. “This is just the tip of the iceberg.”

This story originally appeared in the July/August print edition of Middle Market Growth magazine. Read the full issue in the archive.