Where People Fit into a Company’s Digital Transformation Journey

Digital transformation takes more than technology. Without buy-in from employees and the right partners, middle-market firms’ digitization journeys are likely to hit some major roadblocks. 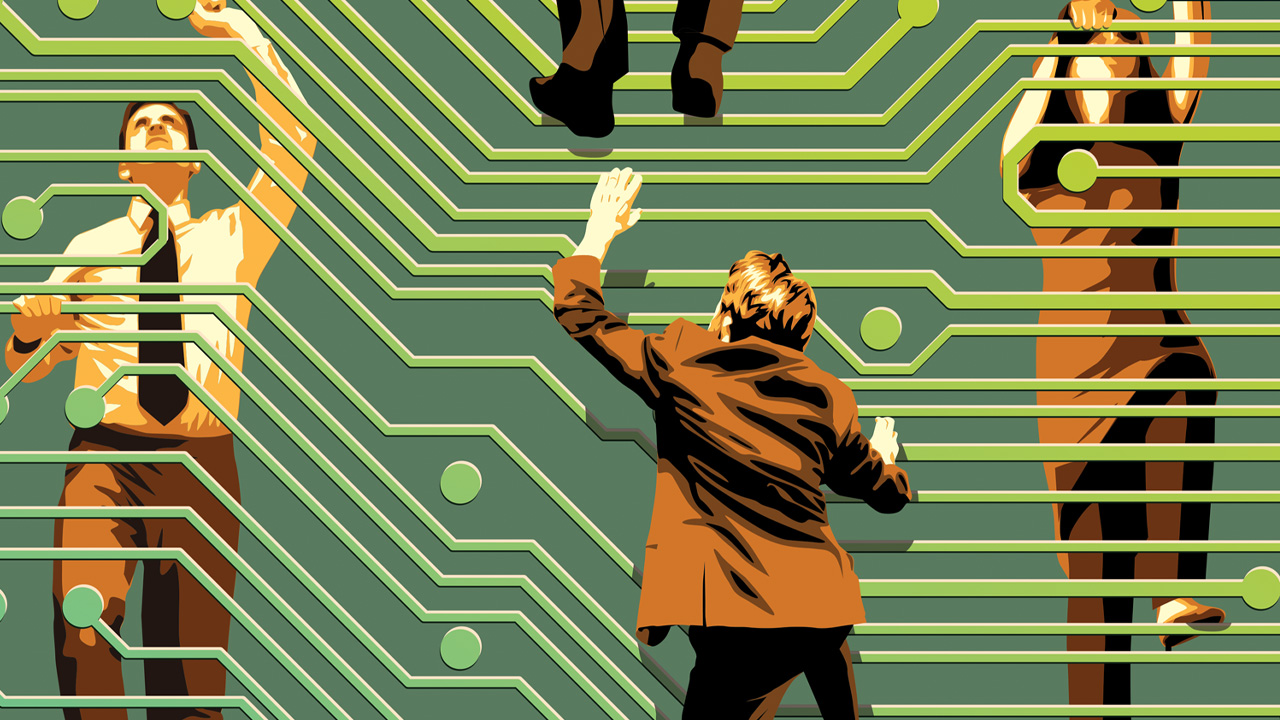 Middle-market companies are mulling digital transformations in order to stay competitive, which can bring uncertainty or fear for employees at all levels who may not understand the goal or see its benefits.

They might resist changes to their roles, worry that their jobs are at risk, or even resign.

In a tight labor market, what can middle-market companies do to move forward on a digital journey while bringing their people along for the ride?

This is a preview of a story that originally appeared in Middle Market Executive’s Winter 2022 issue. Read the full story in the archive. This section of the report was illustrated by Daniel Hertzberg.

“When you take on a big initiative, there are going to be people who will question it,” says Kelley Powell, CEO of MacLaurin Group. “They are going to ask ‘Should we be doing this?’ Or, ‘Why are we investing in this?’”

“Brutal honesty is part of it,” she adds. “You may have to tell people that their jobs are going to change or go away (in their current form). But it is also an opportunity for personal growth.”

The company implemented a new customer relationship management system about two years ago. Asked if he would do anything differently, Twiddy says he would communicate with employees more often about the transition.

“There is no such thing as over-communicating,” he says, acknowledging that rather than large meetings that occurred every few months, more frequent meetings in smaller groups would have helped to combat misinformation and empower employees to ask questions or voice concerns.

During the transition, Tweedy repeatedly referred back to the company’s culture, which relies on shared goals and a team-like atmosphere, to help ease his employees into using the new system.

One of the most impactful technology shifts for any company can be the adoption of a new enterprise resource planning system, an initiative PDC Machines undertook about a year ago.

“ERP implementation is enormously painful, regardless of the size of your organization,” says Kareem Afzal, CEO of the family-owned company, which manufactures hydrogen compressors for hydrogen-fueled cars, buses, planes, trains and other vehicles.

In addition to easing the friction of behavior-change—a tall hurdle for employees who are used to performing tasks a certain way—Afzal says it’s important for a company to explain how a digital transition will benefit employees, often through automation.

“When folks see how the digital transformation affects their day-to-day work and how it makes things more efficient and smooth, they buy into it,” Afzal says.

Afzal says that PDC Machines, which has grown from 87 employees to 220 since last January and expects to grow to 350 by mid-2022, often relies on the expertise of its private equity partner, Arcline Investment Management.

“They’ve been a godsend,” Afzal says. “When we need help or resources, it’s one call or email and they deploy it in a day.”

Partnership is a two-way street, and investors who are betting that technology solutions can improve a company’s performance need to make sure that they’re backing leaders who share their mindset.

“In a lot of the companies where we are investing, we are looking for people who can really be our partners in transforming operations and transforming scale,” says Andrew Dunn, a managing partner of One Equity Partners, a middle-market private equity firm with more than $6 billion in assets in the healthcare and technology sectors in North America and Europe.

As much as technology itself matters for a digital transformation, it isn’t enough to guarantee success. It takes people to implement and use new systems and tools, and leaders’ attitudes set the tone for the cultural shift needed to create a tech-enabled enterprise.

A common pitfall for companies as they enhance their tech capabilities comes when choosing a third-party contractor to work with on a technology project.

When looking for a consultant, Tye Howell, managing director, data and digital, at private equity firm Blue Point Capital Partners, advises getting recommendations from your business network or asking a PE partner or other connection for suggestions.

“We keep a Rolodex of people we have worked with—with private equity-backed companies and with PE firms—and who have had demonstrated success,” Howell says.

MacLaurin Group’s Powell points out that CEOs and other business leaders who view new technology as an investment to grow their businesses, rather than simply as another expense, are better positioned to succeed.

Digital transformation was already a buzz-phrase before 2020; now, effectively employing technology has become a competitive necessity. For Twiddy, open and honest communication with third-party contractors is critical to thriving in today’s business environment.

As he sees it, “The stronger those relationships are, the more resilient we are as a company and the more we will be able to compete with national firms.”

Annemarie Mannion is a former reporter for the  ChicagoTribune and a freelance writer who covers business.

Read the full story in the Winter 2022 edition of Middle Market Executive.