California firms and several debut funds led the pack on middle-market fundraising in the second half of 2021. 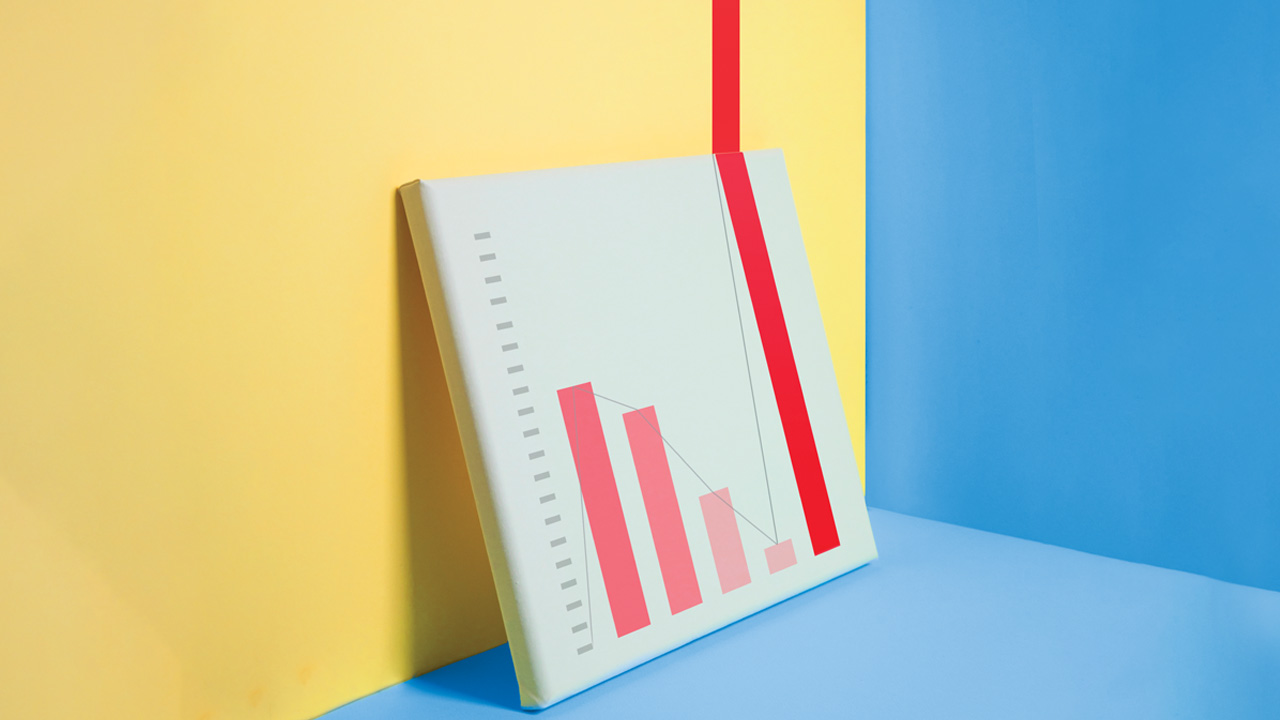 By all counts, 2021 was a solid year for middle-market private equity fundraising. According to data from Preqin, 64 funds were raised in the first half of the year, totaling $56.02 billion of assets.

In the second half of 2021, 54 funds were raised, totaling $44.63 billion in institutional capital. Those numbers beat 2020’s total of 115 funds, which raised $105.83 billion of assets. Not only are more funds being raised, GPs are going back to investors sooner than ever before, according to analysis of the private equity market from PwC.

Private equity managers are raising new funds as well as continuation funds, which allow them to remain invested in a single portfolio company or a small handful of companies that would otherwise be nearing the end of their holding periods. The popularity of these vehicles speaks to the crowded nature of the deal market as GPs look for ways to stick with high-growth portfolio companies longer.

For the funds highlighted in Middle Market DealMaker’s latest fundraising report, betting on growth is a big trend for the year. 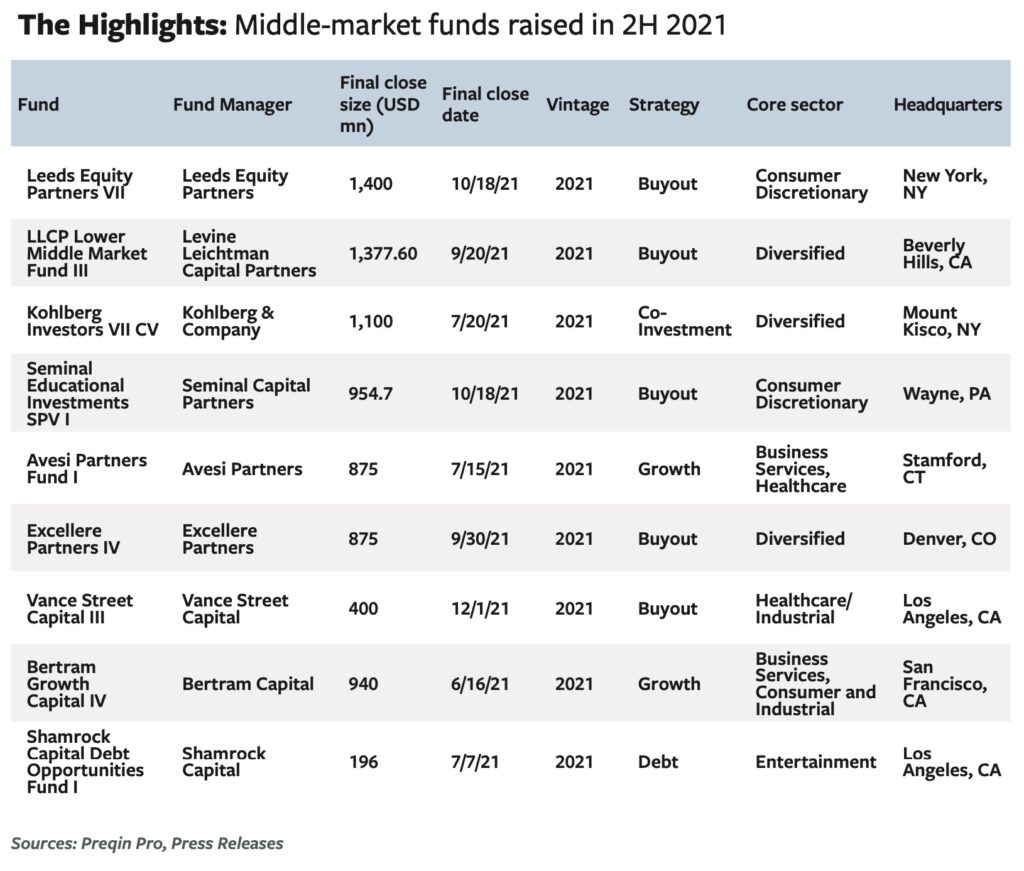 The second half of 2021 saw a small handful of maiden fund launches. Stamford, Connecticut-based Avesi Partners was one such firm. Avesi closed its debut fund with $875 million, beating its $650 million target. Avesi’s team includes Chris Laitala, who was previously at H.I.G. Capital; Chris Williams, co-founder of investment bank Harris Williams; and Peter Erickson, who was previously with healthcare-focused investment bank Triple Tree.

Avesi will build on the expertise of its three founders as it specializes in healthcare and business services companies. “Investors have been extremely receptive to our approach,” Erickson says of the fundraise.

Avesi has already made its first investment in Danforth Advisors, a financial and operational advisor to life sciences companies.

The second half of 2021 fundraising was dominated by California-based firms. Los Angeles-based Levine Leichtman Capital Partners closed its third lower middle-market fund on $1.38 billion in September. The fund beat its hard cap and was one of the largest funds raised targeting the lower middle market all year. The fund is more than double the size of its predecessor fund, which closed in 2016 with total capital commitments of $615 million.

Vance Street Capital, a private equity manager in Los Angeles, closed its fourth fund with $400 million, beating its $375 million target, according to a report from Private Equity International. Vance Street invests in engineered solutions companies in the medical and industrial markets.

Bertram, which was launched in 2006, invests in companies with a minimum of $20 million of revenue and $5 million of EBITDA across the business services, consumer and industrial sectors. Bertram runs a buy-and-build strategy with a focus on operational improvements. The firm also has an in-house technology group—Bertram Labs—which focuses on digital marketing, e-commerce, big data and analytics, and application development for its portfolio companies.

David Hellier, a partner at Bertram and head of the origination and capital markets team, says 2021 was a frenetic year for fundraising and deal flow and 2022 is likely to be more of the same. “Last year was a great year to be an investment banker because of the pace of activity. While that might slow down slightly, we think it’s still going to be a very active year,” he tells Middle Market DealMaker.

According to Hellier, there is still significant interest in middle-market companies across all the sectors Bertram pursues. “Last year there was a lot of focus on the potential impact from COVID, but companies have done generally well,” he explains. “This year, we’re looking more at catch-up issues, including the supply chain backlog, but that’s unlikely to have a long-term impact.”

Even with headwinds like the supply chain crunch, big deals are still getting done. Bertram exited its stake in Paula’s Choice, a digitally native skincare brand, in the second half of last year. Unilever bought the business in a $2 billion deal, one of the largest acquisitions ever for a skin care brand.

Another California firm, Los Angeles-based Shamrock Capital, followed its $1 billion fundraise for its fifth fund in June with a successful close of its first debt fund. Shamrock Capital Debt Opportunities Fund I is a $196 million financing fund for owners of entertainment intellectual property rights.
Shamrock focuses on investments in media, entertainment and communications companies. The firm targets investments of $25 million – $200 million in both control and non-control transactions.

Andy Howard, a partner at Shamrock, says that the headline for 2022 is a focus on business performance. With a crowded deal market and a lot of money to put to work, sponsors will have to make sure they’re being disciplined about valuations and avoid the temptation to do deals out of fear of missing out.

“There are a lot of strong factors going into 2022 as the debt markets remain robust and there continues to be an abundance of capital in search for investment,” Howard says. “It wouldn’t surprise me if the activity is a little more spaced out this year as a lot of people are catching up, a lot of people are exhausted. That said, 2022 will be another strong M&A year as the past year’s disruption has created unique opportunities.”

Within media, entertainment and communications, there is a renewed focus on finding successful ways to deliver content and grow audiences. The advent of ever-expanding streaming and digital platforms has made it harder to stand out. Consolidation plays are also contributing to a robust exit environment for mid-market entertainment and media companies.

“Strategics are back in a big way,” Howard says. “They have confidence in their long-range plans, more cash on their balance sheets than they have had in years, and they are looking to put that capital to work efficiently and methodically.”

The second half of 2021 wasn’t only about California firms and emerging funds. Long-time East Coast investors raised big funds as well.

Leeds Equity Partners, a firm that has been investing in middle-market knowledge companies since 1993, closed its seventh mid-market fund with $1.4 billion in November. The fund beat its $1 billion target and is already 25% invested in four education and knowledge companies: OptionMetrics, engage2learn, Archive360 and Genius SIS.