As we emerge from the pandemic, eye contact and the last-call cocktail have the highest bang for the buck and are poised for a comeback.

In the year since the arrival of COVID-19, we’ve all spent a lot of time parsing data and thinking about what will stay the same and what will change as the world now reopens. One near-and-dear topic to us at Monomoy Capital has been the impact of the pandemic on deal sourcing within private equity. How will COVID, remote work and Zoom change the landscape and the process for cultivating deal flow?

While we are not soothsayers, we would bet our business development budget that the future has a lot of face-to-face meetings in it for private equity firms, investment banks, intermediaries and business owners.

Having crunched the numbers, we feel confident that in-person meetings are the most powerful tool in the deal sourcer’s arsenal. Our data shows that a deal sourced during an in-office meeting on the road is nearly 5x more likely to result in a management presentation than a deal sourced on the phone or over Zoom. In other words, the context in which a deal is first sourced has a substantial bearing on its success in our funnel. We have furthermore found a strong, proximate relationship between in-person meetings and incoming deal flow that does not exist with phone calls or Zooms.

Tracing Flow to its Source

Since Q2 2017, we’ve logged every relevant deal we hear about on a watchlist. We don’t just log in-market deals where we’ve received teasers, but every whisper of every pitch and every possible deal. If an investment banker tells us they expect to pitch a sell-side engagement on behalf of an unnamed, family-owned industrial parts manufacturer with $25 million of EBITDA sometime in the next three months—we ask follow-up questions and log the deal lead on the watchlist. If we hear a rumor that XYZ Advisors is selling a portfolio company of ABC Capital in consumer products, we log that on the watchlist and call into XYZ. We also track every interaction we have with intermediaries, lenders and deal flow sources—phone calls, in-person meetings at conferences, in-person meetings in their offices, in-person meetings in our office.

In a typical year, we log more than 1,500 such interactions with more than 1,000 unique contacts across the industry. We know that at a typical ACG Intergrowth, we source between 50 and 60 unique, new deal leads; and we know that traveling to Cleveland for meetings on a city visit typically yields three to five new deal leads per trip with a high conversion down the funnel. We know what we “see” in the market isn’t subject to selection bias or wishful, anecdote-driven thinking.

We can trace the majority of the Confidential Information Memorandums—CIMs in industry parlance—we review each year back to the first interaction where we heard about the transaction before receiving the teaser. That tracking allowed us to draw out a sharp contrast in quality between deals where our first interaction was an in-person visit vs. a phone call or a Zoom—a split that widens the deeper down the deal funnel you drill.

Over a two-year study period, we looked at the effect of how we first found a deal on its success in our funnel. We classified our activity into city visits (i.e., trips to a given city to meet bankers on their home turf), New York meetings (mostly in our office), conference meetings and BD calls. We then looked at the results of each of those types of meetings in terms of how many deals we sourced per interaction. We found that in-person meetings held during city visits were a little more than twice as likely to result in a new deal lead than a phone call or a Zoom. Moreover, there was a clear hierarchy between meeting types showing that city visits were the highest quality interactions, followed by meetings in and around New York, followed by conference meetings and finally phone calls and Zooms.

What’s more, these trends held through 2020 and into Q1 2021 when travel was mostly shut down, but deal work continued. Even though no one was on the road and we were all on Zoom, the in-person relationships we’d built prior to the pandemic continued to generate deal activity and give us priority attention in the transactions where we signaled interest.

Between 2017 and the onset of COVID in early 2020, what we saw in our data was clear: In-person interactions have a clear positive relationship to deal flow.

Over that period, we found that the quarterly correlation of meeting activity to CIMs was 0.751 (known in statistics as the coefficient of determination or R squared, and where 1.0 indicates perfect correlation). In contrast, the R squared between BD phone call activity and deal flow was significantly lower and has remained so through Q1 2021 and the period of the COVID-19 pandemic. The high statistical correlation between in-person meetings and deal flow suggests to us that in-person activity drives deal volume across our whole of our funnel. 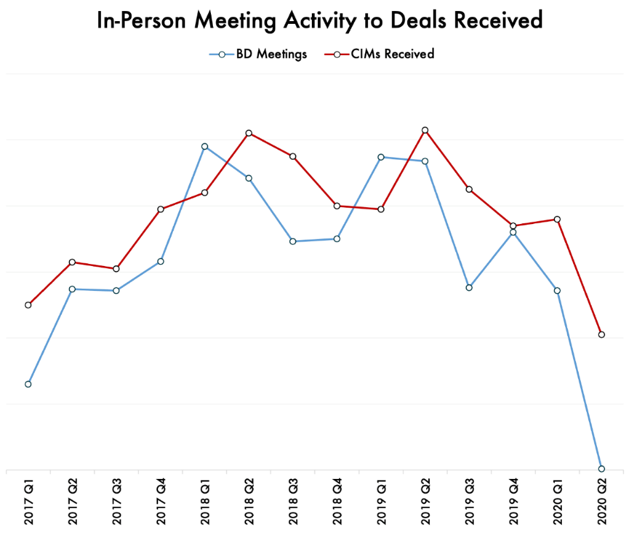 While we can’t explain exactly why in-person meetings drive more deal flow than calls and Zooms or why they move so much better through our funnel, we believe there may be several factors at work.

On the Road Again…

We’ve been through more than a year of traumatic change and disruption in all our lives. It’s definitely going to be exciting (and a little strange) to get back out on the road and figure out the new nuances of personal interaction.

At the end of the day, business development in PE remains a relationship business where personal connects are always going to trump phone or online contacts. I look forward to waving to you across the TSA PreCheck line in the very near future!

[1] So, you’re saying I can do 5x the number of phone calls and get the same outcome as traveling? I guess that is one way to read this data. Of course, a typical city visit has five to eight meetings with two or three calls woven in throughout the day. Figure you need to make between 27 and 43 calls per day to get the equivalent number of MPs out of a calling only effort. That’s two full-time hires or one very overworked BD professional. Either way, best of luck retaining good BD talent on that strategy. 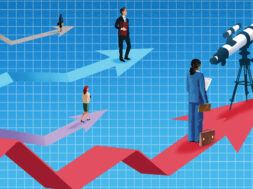 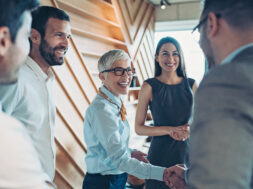 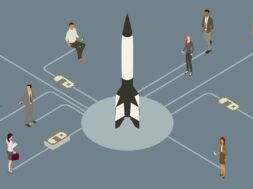 How to up Your Operational Game to Stay Competitive and Profitable